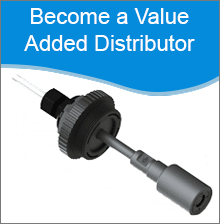 Flow sensors can sense small flows in liquid or gas. Series 5 flow sensors are a family of flow sensors and flow indicators based on a common parts set and principle of operation. Pressure differential across a movable magnetic poppet inside the sensor operates a reed sensor switch and/or provides a visible flow indicator through a transparent window.

Although Series 5 sensors are designed for small flow sensor applications (under 3 GPM), they can be used in bypass lines so flow can be sampled by the sensor without impeding flow efficiency. As an “in the flow stream” sensor, 5’s are only limited by the I.D. of their internal port diameter.

Flow sensors are preset, at time of manufacture, to close contact upon increasing flow rate. Sensor set points range from 0.1 GPM to 1.00 GPM. Series 5 flow sensors and flow sensor sets are offered in your choice of Polypropylene, Acetal, and Kynar PVDF plastics. Except for the 3/8 NPT boss 5-21H flow sensor, connections to the flow medium are made through sensor accessory adapter fittings. Several pipe thread and hose sizes can be accommodated.

Our Series 15 side mounted level sensors and sets are loaded with features of sensors costing 100%-500% more.

15 side mounted level sensors are made up of two cleverly sculptured, injection molded sections. A housing section containing a sealed-in glass magnetic reed switch and a float section containing a permanent magnet. Sections are hinged together by an integral clevis mechanism. The float moves in response to changes in liquid level, thereby transporting the magnet into proximity of the switch. It is a simple concept. Move the float toward the sensor switch housing and the switch “clicks on”. Move the float away and the switch “clicks off”.

The sensors switch action of 15 sensors and sets can be configured for either normally open or normally closed sensor switch action, depending upon the orientation of the level sensor at the time of installation. An orientation arrow symbol is molded into the hex of the body. “Up Arrow denotes float is above the sensors centerline. Conversely, “down arrow” denotes float is below the sensor’s centerline.

This is a bi-metallic sensor switch mechanism packaged in a plastic sheath incorporating a switch section, hex section and 1/8NPT thread for mounting purposes. It mates with a large variety of ERECTA SWITCH components so just about any mounting requirement can be satisfied. And temperature sensors can be combined with level sensors and flow sensors making possible many low cost, efficient solutions to otherwise complex control problems.

11-800 temperature sensors are creep mechanism (having no built in differential) and are characterized by slow make/slow break and rapid cycling capability. As a result they are suited for both control and limit sensor applications.

The switch is not a snap acting device. So potential for rapid cycling in certain situations must be taken into account. Similarly, the thermal lag caused by poor thermal conductivity of the switch’s plastic sheath limits the sensor to temperature changes which occur over several seconds/degree change. As is the case with all Compac products, final design criteria should be based on your testing of our products, in your application, at your facility.

Normally open and normally closed versions are available. Normally open is designated as type “CR” and closes its contacts on rising temperature.